An Auto-Sleeper history. So, do we really know about this Auto-Sleeper History and how it all began? Today they have a great range of motorhomes, both, coachbuilts and van conversions. Making motorhomes of excellence from 1961. That certainly is some sort of record and makes you think back. The swinging sixties, pop music and mods and rockers. All part of our culture and history, when Auto-Sleeper started out. What it must have been like back then? So, take a look at the Auto-Sleeper motorhomes history video and drift back in time. Supported over the years, by manufacturing partners such as; Peugeot, Ford, Fiat, Mercedes Benz and Volkswagen. Winning awards along the way the success continues.

Auto-Sleeper History. So, what do you know about the Auto-Sleeper History? Not a lot or do you know that they are a UK based manufacturer. They are indeed a great tradition of motorhome manufacturers. Making motorhomes of excellence. How Did it Start? Back in the swinging 60’s in fact in 1961. The Trevelyan family were looking for a different type of holiday? Something that their two young sons could join in with. So, Mr Trevelyan came up with a great idea to built their own motorhome. Bare in mind back then caravans were all the rage. In fact every man and his dog had a caravan? So, this was certainly one of the first motorhomes and something to change holidays forever!

Auto-Sleeper models how did it all begin? The idea was simple and was based on a Morris Commercial J2 van. Now the destination back then was even more exotic, than the vehicle itself! That destination involved quite a journey, as they took off on a holiday to the South of France!

A simple holiday, for the Trevelyan family, in a developed van! Yes, the first Auto-Sleeper, crossed the channel into France, on a discovery and adventure that would last for years! Having had a really good experience, the idea grew. On return Mr Trevelyan then converted an Austin van, and this got the attention of the van and car dealer. Henlys in Bristol sold the first ever Auto-Sleeper. Five orders were placed and Auto-Sleepers was born. More help was needed and so the business grew. There are many key dates of doing all sorts of great things, many that were groundbreaking. The Trevelyan family sold the business in 1997 to Steven Riley and Bill Cook, whilst retaining a small shareholding themselves. In 2000, the company was sold to Ian Capes and Stuart Johnson, whose Marquis company in 2005 was acquired by the Italian motorhome manufacturing company, the SEA Group. Today the Auto-Sleeper company in 2017 sold a controlling interest to the Trigano Group. Some interesting points;

Well being a leading Auto-Sleepers dealer is quite a challenge. To maintain the reputation and continue the story. In fact, we hope to see the next 56 years selling Autosleepers. That is how long Auto- Sleeper, have been doing an amazing job, manufacturing motorhomes. Clearly the story goes on and that is a great story, with great manufacturer and partners current and historic;

Over the years Auto-Sleeper motorhomes have built up quite a following. Having developed all sorts of layouts and designed many different motorhomes and campervans. In January 2017, having been the subject of a buyout, by the Trigano Group. This was significant as the retail arm of Auto-Sleeper, Marquis Leisure, was also part of the transaction. This opened up many opportunities. None more so, than the proposition to bring to an exclusively targeted range of coachbuilt motorhomes to the UK.

See the Auto-Sleeper history video. The video is a great history of the story of Auto-Sleepers. That history and service continues with its dealers. There are a number of Autosleeper dealers in the UK. An epic journey from to start to develop motorhomes of excellence. The journey continues today with award winning motorhomes.

Today the McLouis Fusion, has been developing, via the Trigano Group relationship. This is the latest range of fixed bed motorhomes, introduced by Auto-Sleeper and McLouis. Made in Italy and sold by one of the UK’s longest motorhome manufacturers. The established Auto-Sleeper brand lives on.

The McLouis Fusion range, of fixed bed motorhomes, are being sold exclusively by Auto-Sleeper. That has ment a start from scratch, setting up a network of administration, distribution and sales. This has quickly been established and the 5 model range of McLouis Fusion models are selling well. Today, they are being sold by appointed specialist, McLouis Fusion dealers. With the marketing assistance of Auto-Sleeper motorhomes. Targeted social media, with Facebook, Twitter and a bespoke website. This has provided, the missing link to Auto-Sleeper model range. That has introduced a new motorhome of a fixed bed motorhomes. The range, has all that Italian style, with the distinctive, large rear garage space. McLouis as are Auto-Sleeper part of the Trigano Group. The infrastructure behind the McLouis Fusions success, has shown just how to develop this new range.

The traditional Auto-Sleeper motorhomes layouts and use of excellent fabrics, excels. Always, a pleasure to see the craftsmanship continuing today. 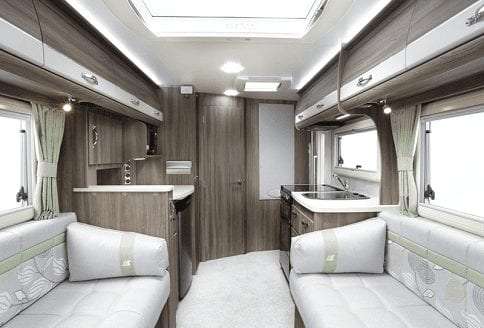 A blend of exciting layouts and designs that are only found in an Italian motorhome. McLouis Fusion is as much as a tradition as well as true style. 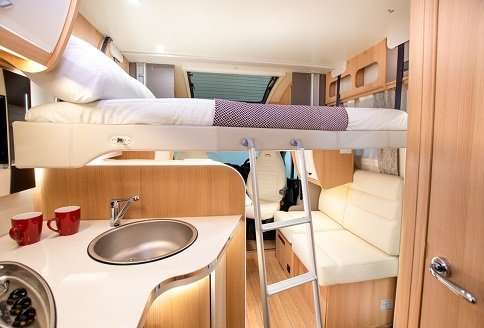