Tecnoform is celebrating its 55th anniversary. It has played an important role the evolution of the RV Industry over the last 55 years as
The post Tecnoform celebrates 55th Anniversary appeared first on Aboutcamp BtoB. 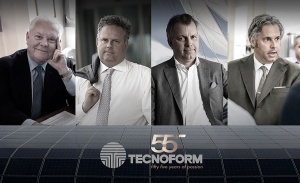 Tecnoform is celebrating its 55th anniversary. It has played an important role the evolution of the RV Industry over the last 55 years as a pioneer in the production of furnishing components and has actively contributed to some of the most important innovations for its customers in the global caravan industry.

Federico Kerkoc, and his wife Luciana, founded Tecnoform in 1965. It is still a family business today and the board of directors has always been composed of family members.

The Kerkoc family has been in charge for 55 years with determination and passion in line with the values of Federico, a very intuitive person with the ability to speak many languages. After his passing, one of his sons – Roberto Kerkoc – was the CEO from 2005 to 2017, until he passed away suddenly. Since then, Renzo Kerkoc, the family engineer, assumed the role of CEO at Tecnoform, sharing the strategic guidelines with his younger brother Andrea.

Today, Tecnoform is recognised as a global market leader with the capability to influence the market with new ideas, competitiveness, high quality and industrialised processes. Tecnoform’s biggest strength lies in the production of high quality and customised solutions, with the elegant made-in-Italy style.

Customers and suppliers are regarded as partners in a co-development approach that contributes to the achievement of the Tecnoform Mission: exceeding and driving customer expectations in a win-win relationship.

Moreover, Tecnoform is committed to reducing its environmental impact by utilizing renewable and sustainable materials. For example, on the roof of its plant in Bologna there is a solar plant that produces 2.2 MWh of electricity, allowing Tecnoform to be practically self-sufficient for electrical energy.

A new management and control system is currently being implemented at Tecnoform focusing on quality, environmental impacts, health and safety. The aim is to optimise the management of the company to make it more effective and sustainable.

Tecnoform believes that the heart and soul of the company are its 160 employees who work with passion and expertise. Together, the team have the capacity to carry out the most demanding customer requests by using their complimentary skills. Young engineers, architects, vision planners, developers and technicians represent the future of Tecnoform. The team are working on challenging objectives around process and product innovations, such as weight reduction technologies, cost reduction and control of the productive process remotely (Industry 4.0).