Volkswagen Commercial Vehicles appoints new Chairman of the Board 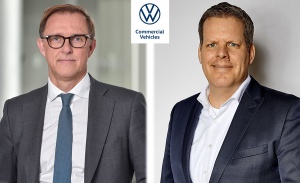 Volkswagen Commercial Vehicles has appointed Professor Dr Carsten Intra to succeed Dr Thomas Sedran as Chairman of the Board of Management from 1 September 2020.

In addition to the operational management of the Volkswagen
Commercial Vehicles brand, Thomas Sedran was involved in a key
way with negotiating and driving forward the strategic alliance with Ford.

Professor Dr Carsten Intra has been Human Resources and Industrial Relations Director at MAN SE and MAN Truck & Bus SE since July 2017. He is also a member of the management board of TRATON SE, responsible for the areas of personnel and IT. With a doctorate in mechanical engineering, he brings with him for his CEO role at Volkswagen Commercial Vehicles broad experience from the commercial vehicles segment. He began at what was then MAN Commercial Vehicles AG in 2001 as a production engineer and by 2004 had already been entrusted with management of the central planning operation for the network of plants. From 2006 onwards Intra headed up the HGV unit.

Following further management positions in Turkey and Brazil, Intra took
over the Production & Logistics brief on the management board of MAN
Truck & Bus AG in 2004. From November 2015 he was also responsible for
the Research & Development brief.

Thomas Sedran has a doctorate in economics and worked from 1988 to
2012 as a corporate advisor. In 2012, Sedran was appointed to the Adam
Opel AG management board and as interim CEO. In 2015, Volkswagen made
him Head of Group Strategy. On 1 September 2018 he became Chairman of
the Volkswagen Commercial Vehicles Brand Management Board.

Together with the Board of Management he set up the future strategy GRIP 2025+, starting the biggest transformation of all time of the brand. Part of this is the development towards electro-mobility along with the fully electric ID. BUZZ, that will be produced at the Hannover plant as of 2022.

The cooperation with Ford, signed in June 2020, will ensure production load at Volkswagen Commercial Vehicles production sites. Under the leadership of Dr Sedran the brand got responsibility on Group level for the development of autonomous driving vehicles. Investments in Argo AI plays an important role in this. A further and key aspect of the transformation is an agreement on the future development of the site in Hannover with the Works Council that excludes, among other things, layoffs until 2029.

As a stand-alone brand within the Volkswagen Group, Volkswagen Commercial Vehicles is responsible for the development,
construction and sales of light commercial vehicles. They include the Transporter, Caddy and Amarok ranges, which are produced in Hannover (D), Poznań (PL), Września (PL) and Pacheco (ARG).

Within the Volkswagen Group, Volkswagen Commercial Vehicles is also the lead brand for Autonomous Driving, Mobility as a Service (MaaS) and Transport as a Service (TaaS), and in future will therefore be developing and producing corresponding Special Purpose Vehicles (SPV), such as robo-taxis and robo-vans. Working at the company’s sites around the globe are more than 24,000 employees, including around 15,000 at the Hannover site.

The post Volkswagen Commercial Vehicles appoints new Chairman of the Board appeared first on Aboutcamp BtoB.